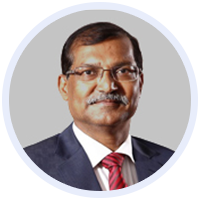 Prior to joining FIPI he was Director (Offshore) with additional charge of Director in charge Business Development & Joint Ventures and Marketing. He was also Director in the Board of OVL, Pawan Hans Ltd. and Dahej SEZ Ltd. A first-class Chemical engineering graduate from Jadavpur University, Calcutta, Shri Sengupta holds a Diploma in Management and a leadership certificate from ESCP, France and IMI Delhi.

Shri Tapas Kumar Sengupta belongs to the select club of production engineers from ONGC who has a balanced exposure to both onshore and offshore oilfield operation in the last 36 years of his long career with ONGC. He has received ONGC’s Highest Award i.e. Chairman Award twice, in 1994 & 2001, for production enhancement in Western Offshore fields with introduction of new technologies. He has also served in Sudan as General Manager in Greater Nile Petroleum Operating Company (GNPOC), on deputation to ONGC Videsh Ltd., for 4 years.

During his tenure as Director(Offshore), the Offshore Assets have been successful in arresting the continuous decline in oil production in the period 2015-16, while the gas production has also started showing an upward trend since 2016-17(4.6% increase compared to 2015-16) and is likely to further increase in 2017-18 due to the implementation of several gas field development projects. He has been instrumental in launching offshore mega projects such as Mumbai High Redevelopment Ph-III (North and South), Bassein Gas Field Development, Additional Development of Vasai (East), Daman Gas field Development and Vashistha & S1 Deepwater Field Development with a combined CAPEX of about Rs. 30,000 crore, besides the mega Deepwater Project KG-DWN-98/2, which alone involves an estimated CAPEX outlay of Rs. 34,000 crore (US$ 5 Billion). Under his leadership as Director I/C Business Development and Joint Ventures, OPAL Petrochemical Complex was successfully completed and commissioned in March 2017.

Shri Sengupta is actively associated with Society of Petroleum Engineers (SPE), USA and he is presently inducted in the International SPE Board as Regional Director of Asia Pacific Region.