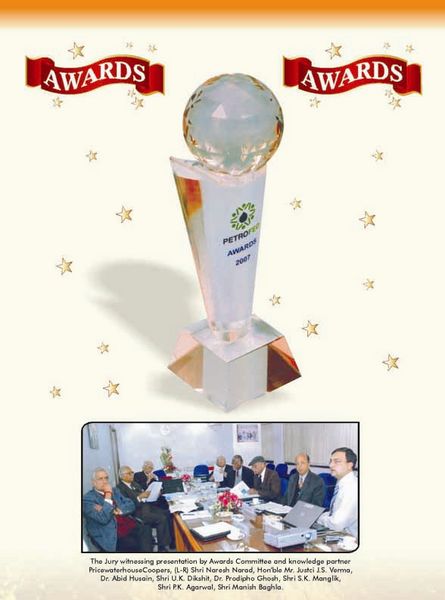 The first PetroFed Oil & Gas Industry Awards in nine categories were given away by the Hon’ble Union Minister of Petroleum & Natural Gas, Shri MurliDeora at a packed function at Mumbai on March 21, 2008 in the presence of Shri M. S. Srinivasan, Secretary, Ministry of Petroleum and Natural Gas.

Congratulating the award winners the Hon’ble Union Minister complimented PetroFed for instituting the awards and their manner of independent evaluation which would spur healthy competition for the growth of the oil and gas industry. He urged all the oil and gas related industry segments to continue to perform better and participate enthusiastically in the forthcoming rounds.

The Petroleum Secretary, Shri M. S. Srinivasan, in his presidential address lauded the contribution of the oil industry in the growth of the economy. He said that as an apex industry federation, PetroFed has been playing a useful role till date in its interactions with various Ministries of Government and in bringing to the notice of the Ministry, issues concerning the efficient functioning of the hydrocarbon industry. The dependence, or to put it more strongly addiction, of the world to hydrocarbons will not disappear over the next 30-40 years, he said while adding that we have to use it in a responsible and efficient manner. The PetroFed award winners have been chosen after an extremely rigorous filtering procedure in a very competent fashion. The knowledge partner, he said has worked hard in going through an array of parameters overseen by an eminent jury. He complimented Indian companies on their improving physical performance and congratulating the award winners said that it should enthuse those who missed it today to perform better.

Welcoming invitees, the Chairman PetroFed and Chairman IndianOilShri S. Behuria said that these awards not only recognise and commend excellence but would go a long way in fostering superlative work in our industry to help us go ‘swifter, higher, stronger!’

The Vice Chairman, PetroFed, Shri P. Raghavendran, President – Refinery Business, RIL proposed a vote of thanks at the conclusion of the awards ceremony. Earlier, Director General, PetroFed, Shri A. K. Arora had given a brief presentation on PetroFed and the Awards.

The scheme of awards approved by the Governing Council of PetroFed is open to all companies operating in India in the oil and gas sector. Preliminary evaluation of all applications received by the closing date of November 30, 2007 was undertaken by our knowledge partner PricewaterhouseCoopers (PwC), who assisted the Awards Committee in presenting the recommendations to the Jury for ratification.

The Jury is headed by Hon’ble Mr. Justice J. S. Verma, former Chief Justice of India. The other members of the Jury are Dr. Abid Hussain, former Ambassador to the United States of America and Shri Naresh Narad, Member, Public Enterprises Selection Board.

The evaluation was undertaken in line with pre-determined weightages assigned to various parameters fixed after due validation. The scheme envisages that no award can be given away in any category unless the prescribed minimum number of applications have been received.

Each award carries a trophy and a citation. The ‘Woman Executive of the Year’ award also carries a cash prize of Rs. 5-6 lakh with each member of the team getting Rs. 50,000/- or more.

Exploration & Production - Company of the Year

Refinery of the Year

Project Management (above ` 2000 crore) Company of the Year

No award for lack of minimum number of entries.

Innovator of the Year – Individual

Innovator of the Year – Team

Woman Executive of the Year in Oil & Gas Industry